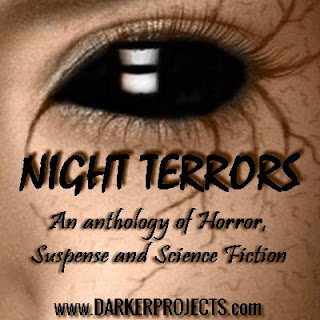 Presented for everyone on Audio Drama Day, Mark Bruzee was nice enough to write, produce and edit the following episode! We hope that everyone enjoys the audio!

Thank you for listening!

Your host is Harbinger.

This episode was written, directed and post produced by Mark Bruzee
Production Assistance by Pete Lutz.
Music and Sound effects courtesy of FREESFX.co.uk
"Count Your Blessings" by Pentatonix was used without permission. 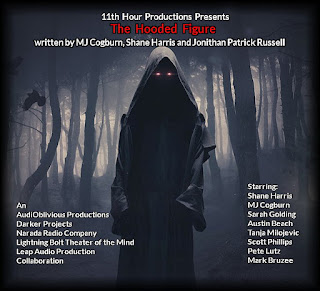 Tonight’s entertainment is based on inheritance. Sometimes, you can inherit many things from your family – sometimes it’s trinkets, expensive furniture all the way up to an excessive amount of money. What happens when it’s more than just objects or monetary gain?

Featured in the cast are players from AudiOblivious, Darker Projects, Narada Radio Company, Lightning Bolt Theater of the Mind and Leap Audio:

The Hooded Figure is produced by MJ Cogburn.

The awesome, original musical score was performed by David Krause.

The Hooded Figure was presented over at the 11th Hour Production.  We hope that you go and listen to the other audios presented there.  We hope you enjoyed the presentation. Thank you for listening.

Happy Halloween!!!
We Will be releasing more audio after Halloween but we definitely wanted to have a small sampling for you!

We hope you enjoy it!

Our cast were
Mark Bruzee as Mr. Johnson
MJ Cogburn as Mrs. Abernathy
Rich Matheson as Mr. Allen and Mr. Jamison
And
Shane Harris as the announcer

Produced by Christian O'Connor
Music by Kevin McLeod
The executive producer for Darker Projects is MJ Cogburn
Thanks for listening!  Enjoy!

Hello everyone!  Keeping with the Halloween theme for the month - we are releasing a new Five Minute Fear!

Featuring:
Dave Morgan as Mike
Persephone Rose as Bob
Shane Harris as the alien and the announcer

Produced by Shane Harris
Music by Kevin McLeod
The executive producer for Darker Projects is MJ Cogburn.
This has been a Darker Projects Production.  Thank you for listening!
Visit us on Facebook and let us know how you liked the episode!  Enjoy!

Hello everyone!  Happy Friday the 13th!  We thought that on this wonderful day that we would release our latest episode of Madness! :)


Forced onto a backroad on their way back, Jarred and Chris stumble across a farmhouse. Seeking help from the family inside proves to be a deadly mistake.