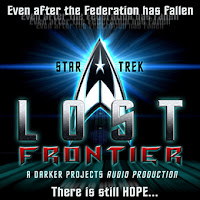 The Enterprise travels to Fergininar at the behest of Grand Nagus Rom, to meet with a new special committee.  It is shaded in secrecy.  As the Enterprise arrives in the system, they detect numerous trade starships of various classes in the system.  It seems that the Ferengi are doing extremely well since the Fall.  What exactly is going on?

Philanthropy was written by George Samuels

Lost Frontier is based on Star Trek, created by Gene Roddenberry and was developed by Eric Busby.
This episode was produced and directed by MJ Cogburn
Post Production work by Mathieu Blondin and Jesse Ferguharson
The executive producer of Darker Projects is MJ Cogburn
This has been a Darker Projects production.  Thank you for listening!
Visit us on Facebook and let us know how you liked the episode!  Enjoy!
Newer Post Older Post Home